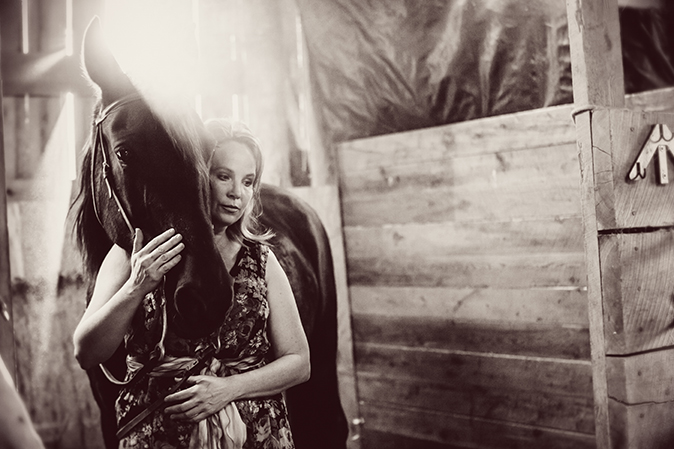 Cynthia Sweeley of Wildfire Ranch Spiritual Retreat believes that we are currently experiencing the worst epidemic of depression ever seen. Socialization is no longer a primary facet of our lives, and the majority of communication occurs via the Internet, on computer or cell phone screens. With this lack of personal interaction, there has been an increase in people masking their emotions, unable to reveal the feelings that are holding them back from enjoying life. Sometimes all it takes is one interaction with a strong, majestic horse at Wildfire Ranch to release what a person is keeping bottled up inside, and to help them move forward on their path to recovery.

A Blessing in Disguise

Sweeley began riding horses at ten years old, and her hobby quickly turned into her passion. During her years as a student at Penn State, as a career woman, and as a young mother, Sweeley missed riding and longed for the day when she would have enough money to own horses again. Finally, in 2002, Sweeley and her husband bought seven acres out in the countryside of Central Pennsylvania, built a 6,000 square foot log lodge to be split between use as the family residence and business headquarters, and purchased ten horses to start a horse ranch. For six years, Sweeley lived what she describes as the “perfect life.” Her business was booming, her family lived in a beautiful home surrounded by grazing horses, and she spent her spare time on horseback, leading trail rides through the nearby forests.

But the good times couldn’t last. Within a three month period in 2008, Sweeley’s business went bankrupt, her husband filed for divorce, the IRS launched an investigation of employee taxes, she was sued by both a printer and the Pennsylvania Department of Labor and Industry, her home went into foreclosure, and she spent a large portion of her time in a wheelchair due to sciatic nerve damage and back pain. In an especially terrifying turn of events, Sweeley was rushed to the hospital where the doctor told her she was experiencing early symptoms of heart failure.

“The cardiologist told me that I was literally dying of a broken heart,” Sweeley explained.

She continued to experience terrible depression and her life became meaningless, pushing her to pray for death. But then her young daughter noticed something that would change Sweeley’s outlook on life forever:  each day, when she was caring for the horses, Sweeley seemed to be happier. Once she realized that just being near the horses was having a therapeutic effect on her, she her peace of mind began to increase dramatically, and a new sense of possibility came into her life.

“I actually wanted to live again,” Sweeley said.  “There was hope.”

The significant impact that the horses were having on her led Sweeley to conduct extensive research on equine therapy for depression.  She spent two years researching equine-assisted therapy, fascinated by the almost magical impact that horses can have on people facing all kinds of emotional battles.  Inspired by research and her own experience Sweeley trained in equine therapy and officially started Wildfire Ranch Spiritual Retreat.

The Ranch and the Horses

Located in Spring Mills, Pennsylvania, Wildfire Ranch offers the horse therapy sessions, guided trail rides, and overnight accommodations. Trail rides are the first experiences guests tend to have at the ranch.  Sweeley and her daughter, along with volunteers, take people on guided rides down public trails in the nearby Bald Eagle State Forest.  Although it started small, as a way to cover the expenses for the horses, in recent years the trail riding program has exploded and now attracts guests from across the country.

Sweeley’s horses are well-suited to riders of all skill levels. With gaited strides which allow for smooth movement, the horses are graceful enough for even first-time riders to trot and canter during trail rides. They are praised by guests for their personalities and peaceful natures.  Sweeley has repeatedly been told that she operates the only existing public trail rides in Central Pennsylvania and that her horses are the happiest horses ever seen at a public trail stable.

While people are on a trail ride with Wildfire Ranch, they often hear about the ranch’s horse therapy program. Sweeley estimates that around 70 percent of people suffer from some level of depression, so it’s no wonder that many guests grow interested in learning more about, and attending, horse therapy sessions. While equine therapy has been proven to be successful for those with physical disabilities, Sweeley emphasizes the fact that Wildfire Ranch provides the therapy for those who are in need of emotional support. Sweeley and her horses work with those suffering from depression, posttraumatic stress disorder, schizophrenia, autism, bipolar disorder, suicidal thoughts, rage, and other emotional hardships.

“There is an epidemic of depression in America today like never seen before and society is demanding solutions,” Sweeley explained.  “Many people find that counseling is effective but not enough to bring the desired peace of mind that will give them better quality of life.” Sweeley, and her specially trained horses, help bridge that gap.

Wildfire Ranch’s horses have undergone extensive preparation  for their role in therapy.  Before engaging with guests, they train for hours in ground exercises that teach them to show respect toward the humans as “leaders of the herd.”  Sweeley implements gentle training techniques that involve praising the horses during times of excellence and removing praise during times of disobedience.  While the training prepares the horses to perform as expected, Sweeley believes that part of the thrill of working with horses comes from the fact that they are living creatures and each possesses a unique personality.

A Mirror to the Mind

“Horse therapy shows people that they are just existing, not living,” said Sweeley.  “Horses can pick up on your emotions even if you don’t feel them.”

Because this intuitive nature, Sweeley believes that at least 90 percent of horse therapy at Wildfire Ranch has an extreme impact on people’s lives.  When guests arrive at the ranch for their first therapy session, they are often suppressing their emotions.  Because of horses’s natural instincts as prey animals, they have a special way of sensing how other living beings are feeling and behaving.  This natural behavior leads a horse to mirror the emotions that are locked deep inside the person they are working with. Sweeley believes that this phenomenon helps people to understand the feelings they have been masking, and opens the door to healing.

One testimonial from an Iraq War veteran who suffered from posttraumatic stress disorder (PTSD) perfectly sums up the role of horses in therapy:

“The horses showed me that I keep everyone at a distance by not allowing them near me.  As I started changing my behavior, the horses changed their own,” said the veteran.  “I never even realized I was so anti-social and depressed.  My entire quality of life is changing right in front of my eyes.”

Along with mimicking the churning emotions within humans, horses fascinate people because of their size and beauty.  The guests at Wildfire Ranch have the opportunity to work with the horses on the ground, in the saddle, and even on the trail.  During therapy sessions, Sweeley and her volunteers lead exercises that empower people.  Having the ability to control a 1,200 pound horse gives guests the emotional strength to realize that they also have the power to control their own lives.

A Balanced Approach to Healing

Wildfire Ranch emphasizes a balanced approach to healing where the mind, body, spirit and emotions are all connected.  Sweeley has done research which has shown her that, if any one of these areas is traumatized, a ripple effect will be seen throughout the rest of the person’s life.  Because of this, Sweeley encourages her guests to be open-minded about the possibility that there is a higher spiritual power, guiding people through life and the healing process.  She has seen many unexplainable miracles occur between people and horses and views this as evidence of God’s power in touching people’s lives through horses.

One 22-year-old Wildfire Ranch visitor, knowing Sweeley’s strong religious beliefs, explained that she was an atheist and did not want anyone to talk to her about God.  During her trail ride, the woman shared that she suffered from severe insomnia, averaging only two or three hours of sleep per night.  Little success with prescription medications, exercise, and counseling had left her feeling hopeless.  After the ride, the woman departed, and Sweeley didn’t give the session much additional thought.  However, six months later she received a phone call from the woman, who told her: “I don’t know what you did to me, but I have been sleeping nine to ten hours a night since that trail ride. I want you to tell me about the God you believe in.”

“When something cannot be explained, it is supernatural, or as we call it, ‘a God thing’,” Sweeley said.

While religion is a prominent part of Sweeley’s personal life, she encourages people of all belief systems to visit Wildfire Ranch and experience the therapeutic benefits associated with human-animal interaction.

The popularity of equine therapy, and the success of programs such as those offered at Wildfire Ranch, have led to an increase in the number of people interested in partnering with a horse as part of their healing process.

Sweeley’s operation is constantly growing, and she is confident in what lies ahead. In the near future, she believes that she will need to hire employees, purchase more land, and expand her facilities in order to meet demands.  As Wildfire Ranch and equine therapy continue to become better known, Sweeley feels that she may end up committing her operation to equine therapy full-time.

“Horses are in another world or realm.  Not a lot of people have horses anymore, so when they are around them, they are awestruck,” said Sweeley.

“I want to be able to continue to give people this life-changing experience.”